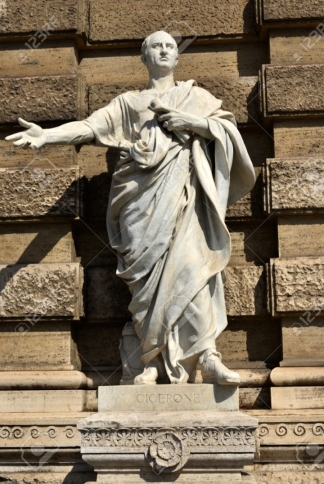 (Statue of Cicero, the Roman orator)

Being condemned by Plato for being essentially manipulative, rhetoric (the art of persuasive speech, also known as sophism) is back as a new trend in philosophy, especially in the French system of philosophy teaching. So what is it all about?

The new trend of public speaking or in front of a camera, popularized by social platforms such as TED Talks, You Tube, podcasts and the video making in stories posts, rhetoric, the longtime enemy of philosophy, has been for some years, the new way of teaching, coaching or delivering messages. On the other hand, reading/writing has become more inclined to blogs, articles, caption and tweets, while books are taking the second row place. Hence, one can see the success of short stories.

In spite of the efforts of Aristotle to rehabilitate rhetoric as a needed method in some fields (discussed in further blog posts), philosophy took a different path. In fact, after Plato, philosophers left the oral scene to politicians and public speakers and preferred writing their ideas and concepts.  The result was the elitist character of philosophy, only reserved for professionals and initiated minds, for scholars and some eccentric people. Was it their aim to be elitists in the first place? I can’t say so but somehow it is not far from being true.

Should philosophy adopt orality instead of literacy? The French for instance, decided to turn rhetoric into a discipline to be taught in schools as an elective course of philosophy and literature. And we must not forget the growing numbers of philosophy conferences everywhere.

That being said, and after centuries long battle between philosophy and rhetoric, philosophers will be present more and more on the talking platforms. But, if you want to master communication, you have to consider reading Aristotle!

For more insights on Plato’s position on rhetoric and its effect on society, you can check these posts:

Reblog: Introduction to Plato: Foreshadowing and Prefiguring — Discourses on Minerva

What are archetypes and how do they influence our relationships?

Plato’s allegory of the cave or why stupid people took over the world!

This is a text widget. The Text Widget allows you to add text or HTML to your sidebar. You can use a text widget to display text, links, images, HTML, or a combination of these. Edit them in the Widget section of the Customizer.
Loading Comments...
%d bloggers like this: